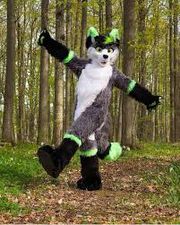 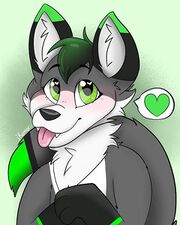 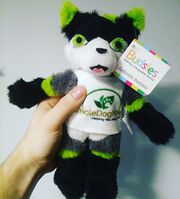 Outside of fursuiting, Firefly usually wears a rainbow collar and 8 different scarfs. He rarely wears rainbow collars on his neck and rose on his fursuit head.

He has got a animal paw rainbow tattoo on his stomach.

2016, He discovered the fandom through furry arts on Facebook.

Firefly came out the idea of creating his fursona because his favourite colour is green and it was created in 2015.

Firefly's fursuit was made by Mischief Makers between 2016 - 2017. He received the fursuit in Midwest Furfest 2017.

December 4, 2018, he uploaded his first Midwest FurFest 2018 KLACE HUSKEE VS FIREFLY WOLFY video on his channel.