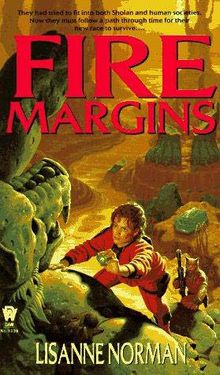 Fire Margins is the third book of the Sholan Alliance Series, written by Lisanne Norman. Although they are best classified as science fiction, they also include elements of fantasy and romance. Many of the main characters are telepaths, which is one of the major elements of the series.

Carrie and Kusac - she a human telepath, he a Sholan one - have together found a love stronger than all the differences between their two races. But now they have become the center of a power struggle between their peoples, as well as one between the various Guilds and Clans on the Sholan homeworld. And they have discovered, too, that their situation is not unique. Other humans and Sholans are bonding as well.

With the Sholan homeworld about to bear witness to the birth of a new hybridized race with powers beyond the control of any of the Guilds, the current unstable political climate may soon explode into something far more violent. Approached by the Telepaths, the Warriors, and the secret organization known as the Brotherhood, Kusac realizes that he and Carry have no choice but to strike out on their own, forming a new group outside of all the Clans and Guilds and owing loyalty only to the most ancient of their gods. For only through exploring the Sholans' long-buried and purposely forgotten past, can they hope to find the answers they seek - and the path to survival not only for their own new people, but for the Sholans and humans as well...