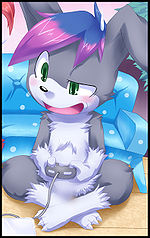 Fion Patton (also known as Dragnaworld and Dragonboy) is a furry who lives in Laredo, Texas, U.S.A.[1] He appears on Second Life as a grey anthropomorphic bunny with purple hair that fades into pink, then red.

Fion started out in the Furry Fandom in Oct 2005 when he began using Furcadia, where he made and ran a place named Apex Tavern & Inn which he ran until December.

In late December 2005 he began using Second Life and within a few weeks started making furry avatars for Second Life.

In July 2008 Fion become the owner of C0nnerc00n's Team Fortress 2 private server which lasted up until January 2009 when he was forced to shut it down due to financial issues.

Fion is seen with many different avatars, most of which he has made himself. He spends his days on Second Life making chibi-ish style avatars and Plush toys at DB Studios, a shop he owns which is located in a few places throughout Second Life. He also does a set amount of Second Life avatar commissions per month on a first-come, first-served basis.

Fion is an actor and contributor for Peach Fuzz studio in Second Life, and is famous for his Second Life character Null.

Fion owns, built, and maintains an Mature-Themed cartoon sim nicknamed "Button". It is located in the sim Desperation Vampkiss where he hosts his main vendor among other vendors owned by various builders.

Current locations of DB Studios shops in Second Life can be found in: