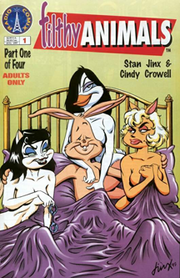 Cover of issue #1, featuring several of the comic's main characters

The rights to Filthy Animals were eventually granted to Stan Jinx, Cindy Crowell and Radio Comix to publish a storyline created by Jinx and Crowell based on Kez Wilson's characters.