Fideel is a fursuiter who lives in Belgium

Fideel used to be an orange fox. As a young cub he got adopted by a dragon family that saved him from a forest fire.
When he grew up they gave him some of their magical powers and changed his fur colours. Fideel is also a sizeshifter, which means he can shrink or grow to any size he wants.
His backstory can be found Here.

Fideel's Fursuit was build in 2013 by AlphaDogs, owned by Honeymoon_Omega_Twilight.
At conventions he's running around playfully in fursuit for about 85% of the time. The other 15% is spent by eating and sleeping.
The head recently got a makeover after turning 4 years old. 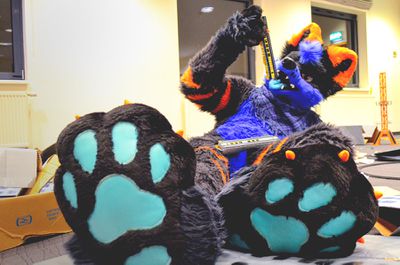