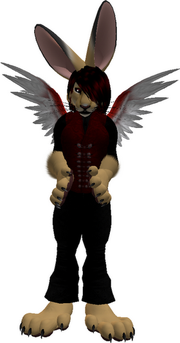 He was a furry Second Life mentor known as roger.blackhawk up until December 11, 2009, when Linden Lab purged all official mentor associations with their company. After which he moved to an account named steampunk.gears where he spent his in-world time at Daz Island as an active virtual developer on behalf of Darlisa Riggs a tech writer who managed the DAZ estate in-world for DAZ3D®, his work focused on developing a Virtual University, a new mall and various scripted projects to push DAZ Island to a focal point for in-world learning & mesh.

Late in 2010 Daz Island lost funding and was closed down though briefly moved to Opensim under the grid name DazLife.

Fesothe came to Second Life around 2006 using throwaway accounts, he created his main account on the 8/5/2006 with the name Roger Blackhawk, after suffering in-game Drama he created a new account on 1st of December 2007 called SteamPunk Gears, and took Steam as his Fursona name, though he now goes by the name Bunjie.

Since 2006 he's been a reclusive fur within the second life version of the fandom, and in-active within the general population of furry websites for over the last four years, he tries to maintain the development of his fursona and incorporate his interests in anthropomorphic and steampunk culture into his back story, he's held a long-standing passive interest in these cultures long before discovering the mainstream furries and steampunk community's through Second Life.

Around 2008-2009, he published mild comments to which a group of trolls on its last death throws took offence and overwhelmed his blog[2] with second life script traffic, used as a demonstration to scare other furries within Second Life that they were still active and capable of causing mischief, in reality, there was only one PN left who was struggling to maintain his reputation after he had taken over the leadership, but after experiencing a tirade of abuse from Corsi Mousehold who was misinformed and perceived him as a personal threat to his land and business as well as the PN in general, should his one blog post fire them up into attacking other furries, he was threatened with permanent banishment from every furry website, and in-world location should he ever speak to them again.

Since the aforementioned verbal abuse which was against the backdrop of what amounted to little more than one post at Furportal his old blog that was to be his window into the second life furry fandom as he explored it, and what he considers nothing more than a mild goodbye joke to a known group he'd experienced on many occasion's.

Around late 2010, during the confusion as the new CEO of Second Life Rod Humble took over from Philip Linden, Bunjie took over two twitter accounts of the names Rod Humble and Rod Linden before Linden Lab had a chance to set up the accounts. He used "Rod Linden" as a parody account to launch a tirade at Linden Lab and their residents in order to smoke out the new CEO who had requested no contact during the Public Relations notice posted weeks earlier, which some residents felt was an insult because they'd waited so long.

Known as "The great rod humble twitter metagame", the primary account became a focus of a part of Second Life community, via tweets, re-tweets and in world whispers, while the new CEO secretly set up his old account [3] before following the account in his name and finding the humour in it was pleased that residents we're willing and ready to talk to him, both parody and Rodviks official account was mildly maintained in order to indoctrinate the new CEO into the ways and issues of Second Life residents, within the hope he would take over his official account names and maintain active communications with residents.

The issue came to a head when Bunjie realized that Rodvik would continue to use the moniker he prefers to go by rather than his personal name, which Bunjie felt was strange considering the new CEO was a professional and went by his real name, Bunjie wiped the accounts in order to let the new CEO to gain twitter experience first hand without interruptions.

He is currently inactive in Second Life and working within a private open simulator, that goes by the name The Furpunk Workshop which he is developing as a workspace to complete and expand his 3D and project portfolio's at furpunk before moving onto more mainstream professional 3D applications.

Fesothe has been a director of a technology company previously (FossaLab[4].) and is now setting up several UK businesses, one under his fursona name Fesothe 3D and FurShows a business that will own a social enterprise subsidiary helping furrys create media content. He's also setting up a UK political party called The Furry Party and is preparing to run as a candidate in Bolton for MP.

In May 2021 Fesothe's TechCrunch comment[5] was featured in a Twitter segment on Jimmy Kimmel Live, his comment was about the furry fandom's toxic use of the slur NaziFur, and related to the roll out of a new twitter update for toxic reply prompts.