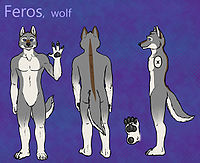 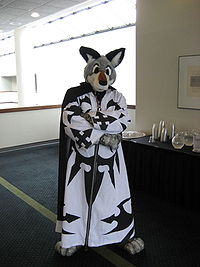 Feros Darkshade (born August 9th, 1988) is a fursuiter who lives in Crestview, Florida, United States.[1] His fursona is a wolf. 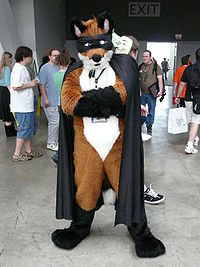 Feros as Schadenfreude at Anthrocon 2008 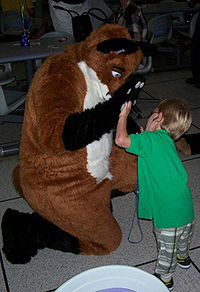 Feros performing with Paws Fur a Cause as "Swift Fox"

Feros' main interest in the fandom is fursuiting. He has owned a partial suit of his fursona, and a full suit of his alternate character, Schadenfreude.

On November 11th, 2007, Feros was a "subservient fursuit" on the Funday PawPet Show. He made a second "subservient" appearance on the show with his good friend Kataru Baxter on January 13th, 2008. Feros has also made three separate appearances on the show as the evil fox, Schadenfreude.

Feros' partial of his wolf fursona was retired in early 2008, and Schadenfreude became his featured suit.

Feros founded the volunteer mascot organization, Paws Fur a Cause in March 2008. This organization specializes in freelance fursuit performance without compensation, for the benefit of any interested clients. When entertaining at Paws Fur a Cause events, Schadenfreude's signature cape and mask are removed, and the character is performed as "Swift Fox", contrary to the evil persona that has been established for events within the fandom.