Ferkahhan's Fursona. Drawn by himself.

Ferkahhan Ze'Thlax Valvyn-Léuthmar ; real name Geraint Straker; born February 8, 1989 in Ascot, Berkshire) is an artist and who has been a member of furry fandom since March 2000.

Ferkahhan's character is a platinum scaled anthropomorphic draconic hybrid with long, black hair and and four Eastern Dragon whiskers of the same colour. His character wears purple half-moon spectacles and a long blue man-skirt with Eldar Runes on it. He has a stripe of blue scales down his chest with a single Eldar rune in the middle of his torso. His character can be seen carrying one of four weapons. A Katana, an ethereal Axe, a four bladed Scythe or a pair of Katar.

Currently (2010) Ferkahhan is studying Law at Thames Valley University in Reading, Berkshire. Ferkahhan is also a former member of the LondonFurs community and had been attending the furmeets in Embankment, London, since the first RBW meet on December 2nd, 2006. He stopped attending these meets owing to personal reasons in 2008. 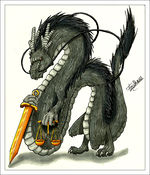 Ferkahhan has been drawing Anthropomorphic art since 2003 and currently specialises in drawing anthropomorphic reptiles, ranging from basic lizards to dragons. He will attempt another species if the situation calls for it, but generally prefers to stick to scaled creatures.

Ferkahhan has been roleplaying as his character ever since he became a member of the furry fandom. He can be found nearly every day on DeviantArt

He has three characters he roleplays as.


Please note that the three images above were drawn by Ferkahhan
Nowadays he does not roleplay much. But when he does, he usually engages in fantasy based roleplays, set in his own invented world named Vangyrria. Other types of roleplays he may engage in are fights, modern, science fiction and possibly romance (though this is rare).

Ferkahhan's main interest is literature. He loves to read and write stories and roleplays. Another interest of his is anime/manga, mainly the Bleach, Princess Mononoke and Ghost in the Shell.