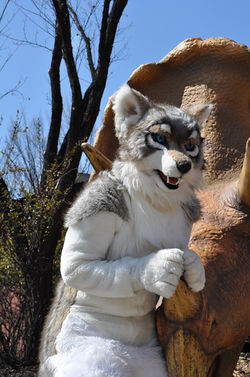 Fenris Wolfbane. Made by Beetlecat

Fenris Wolfbane is your typical canidae species Grey Wolf. He has had a pretty horrible past but still kept his playful pup nature. The main color of his fur is white with the secondary color of Grey (and Dark Grey). There are some brown highlights in his fur as well. He has bright blue eyes. He loves to frolick with other furries and sometimes get into trouble. His outfit of choice: his fur.

Olympia is a female Big-Horned Sheep who hails from the depths of the Albertan Rocky Mountains. She is a clumsy, yet playful and charming character. She is of natural Alberta Big-Horned Sheep colouration with brown eyes. This fursuit is on the waiting list of Beetlecat. She will be a 3/4 suit.

Fitch is a Dutch Angel Dragon with Lady Gouldian finch colouration. He is a very playful character who uses whistles as communication.

Fenris Wolfbane made by Beetlecat

More fursuits will probably be added to the pile in time.

Fenris Wolfbane mainly sticks to his local furry events in Calgary, Alberta but will venture out to different provinces for their meets. Hopefully in the future, he will be attending many conventions to meet some of his favorite fursuiters.

Fenris Wolfbane has been drawing for many years. He learned tricks of the trade by his grandmother and a plethora of different art teachers through the years. Before he started drawing furries, he drew realistic animals and anime[2]. A short time before he came out in the furry fandom he started to draw anthropomorphic characters. To tell the truth, he sucked at drawing them, but little by little he continues to improve. He takes commissions.