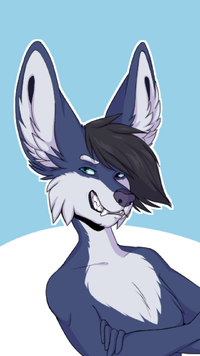 Fennris (born July 6, 1996) is a furry fan, Babyfur and MILFur, who was born and lives in Israel.

Fennris' fur is blue and white, with black hair, his eyes are blue (right) and brown (left). He is drawn mostly SFW but sometimes NSFW.

Fennris loves working with computers (which he did during his army service), looking at furry art, reading manga and watching anime shows.

Fennris loves listening to metal music of all kinds, mostly black metal, death metal and progressive metal, and he likes to play guitar.

Fennris is asexual with mostly aromantic orientation (and sometimes Demi-romantic).

As of 2019, Fennris has yet to attend international furcons, and had only been to Israeli anime, manga and sci-fi cons (Date, Location):