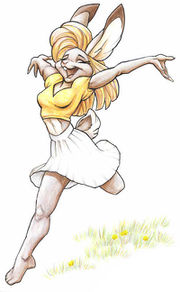 Female (♀. Latin femella, diminutive form of femina), is the sex of an organism, or a part of an organism, which produces non-mobile ova (egg cells). Most female mammals, including female humans, have two X chromosomes.

In 1998, the non-scientific survey The Sociology of Furry Fandom by David J. Rust, indicated that females (fans and artists) were drastically in the minority within the furry fandom; A survey of 350 furries found that females comprised 15% of the population, as compared to a 2005 U.S. Census report of 51% in the U.S. as a whole [1] [2].