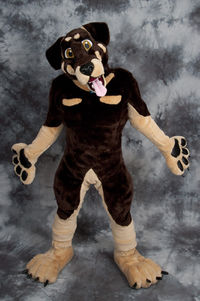 Felix Katz is a fursuiter who lives in Zug, Switzerland.[1] His fursona is a cat.[2]

Felix owns three fursuits, each of which he constructed himself:

Adrian is not a fursona suit; it is rather a character that is intended to appeal to the public and be fun to perform in, hence its happy and smiling appearance.

Adrian is built as a three-piece suit (head, body with attached front paws, and rear paws), with hidden zippers along the wrists to allow the wearer to put it on and take it off without help. Adrian also features a muscle suit with foam padding to give the wearer the required bulk.

In addition to Eurofurence, Adrian has attended FWA 2011, MephitMiniCon and the Swiss furry convention CH-on, as well as smaller, regional fursuit events.