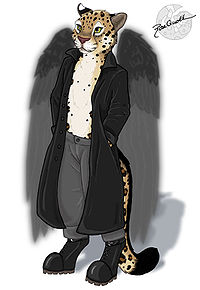 Felix Carni, or just Felix, is a "not-so-average" leopard from the cold, remote corner of Europe called Norway. Felix was born in, and have lived most of his life in a town not far from Norway's capital, Oslo.

He appears to be a typical leopard when it comes to appearance, but he is known to have some exhibitionistic tendencies: especially at furmeets, where collar, cat eye contacts, tails, etc...are often part of his wardrobe. This is a huge contrast to his shyness when it comes to talking to people he doesn't know well.

Felix has been fascinated by Australia for as long as he can remember, and is currently planning on visiting the land down under sometime late 2007. This fascination has given birth to a special Australian form of his fursona, Cobar. 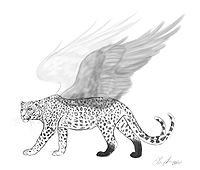 The Felix people know is an ethereal, winged leopard. The feature that can be used to identify Felix is his wings. Made from ethereal energy, they don't have any real set shape or consistency. Usually they appear to be feathery wings, either black or white, made from smoke, but they can be anything.

Felix can appear as the following"

Felix was at the time of his first suit, the only fursuiter in Norway. In later years several other Norwegian furs have gotten fursuits, adding to the Norwegian "biodiversity".

Felix's suit is a partial leopard suit (head, handpaws/arms and tail, with feetpaws in the making) made by the talented Rose Quoll. He has also gotten a suit made of his alter ego, Cobar, which debuted as a partial at FC 09.

Felix is lucky enough to be allowed to share his apartment with his sweet cat, Tamasii. She is a grey and white semi-longhaired mix, born late August - early September 2005. Abandoned by her mother, a homeless cat, at an approximate age of 6 weeks she was rescued by Felix's sister, and then adopted by Felix. Tamasii has been the queen of Felix's household ever since.

Felix loves riding his bicycle. If the weather isn't too bad, and nothing else demands his attention he's often seen riding in and around his hometown. His favorite area to ride is in the forest, but he spends most of the time riding on tarmac because of his location.

In addition to that, he spends a lot of time in front of the computer. He is no longer the gamer he once were, but some games brings him back to the computer (or XBOX) (like Oblivion). He can also be found on the Bronze Dragonflight WoW server, together with several other Norwegian furs. Usually he spends a lot of time keeping an eye on his friendslist on LiveJournal and several fora, like Norwegian Paws.