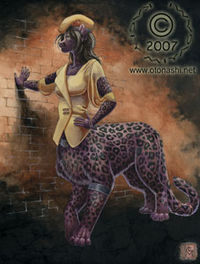 Felitaurs are one of the most common taur variants within the furry fandom. While the most commonly found species in the fandom are chakats, others exist too, such as wemics and tigertaurs.

Felitaurs have existed as far back as Assyrian culture. Artwork during the Middle Assyrian period depicts a type of leonid felitaur, known as an urmahlullu, a creature that protected washrooms from evil demons. [1][2]. Another example of felitaurs is the sagittary - a half man, half lion figure similar to those used to depict the star sign Sagittarius, often depicted with the man half with a drawn bow. [3]

In today's fandom, felitaurs are normally depicted as having the lower body of any of the big cats, a humanoid torso, and anthro-feline faces. They have a fur coat covering their entire body excepting the pads of the hands and paws.