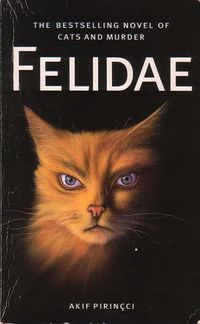 Felidae is the first in a series of German novels by Akif Pirincçi, which was first published in 1989 and translated into English in 1993. The books are murder mysteries set in modern-day Germany and feature a domestic cat by the name of Francis who assumes the role of detective. The novel was made into an animated feature film Felidae in 1994.

When several neighbourhood cats are found mutilated and dead, Francis is drawn reluctantly into the role of detective.

The world of Felidae is filled with numerous and varied themes and concepts. There are cults, vivisection laboratories, ancient Egyptian history, evolutionary theories and a resemblance to the events of the Holocaust of World War II.

The novel is also intended for an adult audience, with graphic descriptions of the violently dispatched felines as well as numerous sexual references and even a sex scene between felines.

The feline’s ability to speak to one another is the major anthropomorphic aspect of the cats in the novel. Some of the cats also engage in human activities such as participating in cults, operating computers and reading books. The novel has a deep sense of black humour and irony, as many of the cats have a negative view on the human race.

Bluebeard for instance, refers to them as ‘can-openers,’ as that is all human are good for doing. The irony lies in how those human-hating cats behave so much like people. Indeed, the novel is symbolic of particular the acts committed by the Nazis during the Holocaust. Or to put it more generally, man’s cruelty against man.

Only the first two novels, Felidae and Francis (as Felidae on the Road) have been translated into English; the others, all subtitled 'Ein Felidae-Roman' (meaning ‘A Felidae Novel), are Cave Canem (1999), Das Duell (2002), and Salve Roma! (2004).