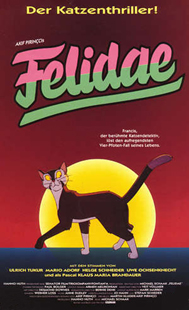 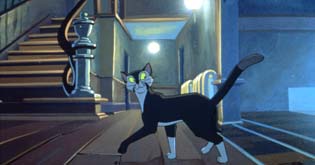 Francis, the cat detective of Felidae.

Felidae is a controversial mystery animated movie that was released in Germany in 1994 by Michael Schaack and the animation studio Trickompany. The screenplay is based on the novel Felidae and was co-written by the novel's author, Akif Pirinçci.[1]

This animated movie contains graphic scenes depicting animal abuse, violence, gore, and sexual intercourse between animals. In addition there are adult themes, strong language, brief use of alcohol and concepts such as cults, vivisection laboratories, ancient Egyptian history, evolutionary theories and a resemblance to the events of The Holocaust of World War II.

The film was released in its English version in Australia only for a short time by RocVale Film. The film was to be released in UK/Ireland (English Europe) & USA/Canada (North America), but distribution was suspended for some reason that is particularly unknown.[citation needed]

The film was also released in Russia on VHS in the late '90s. Released by the company "EA", this version had Russian voices dubbed over English.

The film had an unreleased English dub, which can only found on the original German DVD.

In January 2019, one Behind the Voice Actors user (Millicent) pinpointed the English cast to London.

The film follows the story of the original novel very closely. The following is a list of major differences between the film and novel:

The feline’s ability to speak to one another is the major anthropomorphic aspect of the cats in both the film and the original novel on which the film is based. Some of the cats also engage in human activities such as participating in cults, operating computers and reading books. The novel has a deep sense of black humour and irony, as many of the cats have a negative view on the human race. Bluebeard for instance, refers to them as ‘can-openers,’ as that is all human are good for doing. The irony lies in how those human-hating cats behave so much like people. Indeed, the novel is symbolic of particular the acts committed by the Nazis during The Holocaust. Or to put it more generally, man’s cruelty against man.