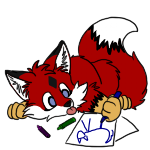 Fay, as drawn by herself.

Fay V or just Fay, formerly known as Failev (born 30 April 1989), is an artist and fursuiter who lives in Montana, USA. 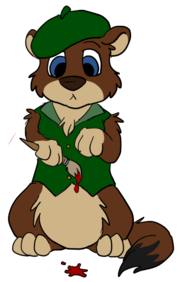 Wesley, as designed by Fay. 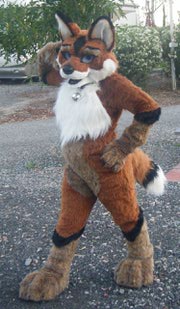 Fay fursuit, made by Scribblefox.

Fay first got into the furry fandom around 2009 when her boyfriend at the time told her about furries. Although first under the impression that furry was all about sexual deviancy, after some convincing, she soon realized that there was more to the community than that.

The same year, Fay attended the now defunct All Fur Fun, where she officially decided to become involved in the fandom[1]. A few months later, Fay signed up for Fur Affinity under the alias Failev, as well as the Fur Affinity Forums. She maintained the account for roughly half a year, before switching to her now permanent account at FayV. Fay V has further expanded her presence in the fandom by helping to develop Weasyl as well as host multiple panels at various conventions[2]

After changing her alias, Fay began to get increasingly popular on the Fur Affinity Forums.[citation needed] This is most easily noted by the period in which many users on the forums had avatars drawn her, most of them made as gifts.[3][4] Around May of 2011, Fay applied to be a moderator, bolstered by her widespread like ability within the community,[citation needed] and was hired as staff a month later, along with Takun, Ramsay Baggins, and Dinosaur Dammit.[5] In just a few months, Fay moved up the ranks to super-moderator, before being made a main site administrator in November 2011.[citation needed]

Throughout her involvement as FA staff, Fay has been known to criticize how the site operates[6][7], but also came to the defense of certain FA dealings, depending on the situation.[clarify]

In December 2011, Fay V was instrumental in trying to mediate a conflict in which Fur Affinity owner Dragoneer began deleting animated photograph GIF files, despite the AUP at the time not forbidding them.[8] The argument from Dragoneer was that animated GIFs were a type of video, and were therefore banned under the AUP,[citation needed] while also conceding that the AUP needed to be updated to reflect this.[citation needed] After persuasion from Fay, the AUP was not[clarify] changed to specifically ban photo GIFs.

In April 2012, Fay took what would become an extended hiatus from FA adminship, citing stress which made going through tickets "a chore".[9] This hiatus has since become a permanent separation from Furaffinity Staff as Fay began work with alternate art gallery site Weasyl.[10]

Following frustration over the GIF incident, Fay was approached to join the staff of Weasyl (then known as Fergal). Upon the staff's official formation in January 2012, Fay was appointed site administrator in order to help shape the policies of the site.

Throughout her time as Weasyl staff, Fay has used her influence in the Fur Affinity community to get feedback on aspects of the site as it develops.[11][12][13] Fay is the creator of Wesley, the site's paintbrush-tail tipped ermine mascot[14], who was designed based on the input of various staff members. Since his creation, Fay has been the primary creator of all art of Wesley.

Fay's fursona is a female red and tan red fox/corsac fox with a diamond fur pattern. There are five diamond marks on Fay, one of the forehead, a diamond on the back of each ear, one on the back, and the white fluff on her chest makes the fifth diamond mark. This motif is based on playing card fortunes and the five of diamonds which primarily means "Change" for both the good and the bad, representing loss and regret, or coming success and happiness.

Two fursuits have been made of Fay; the first was homemade,[15] while the second was made by Scribblefox and debuted at Anthrocon 2011.

Fay often suits outside of fandom activities and conventions. Primarily Fay uses her fursuit to volunteer at local preschools for underprivileged children,[citation needed] but she also attends local festivals and events.