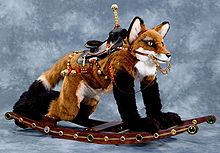 Fay Fox is a fursuiter whose fursona is a carousel fox, often depicted complete with saddle and brass pole.

Fay Fox's original fursuit, of his carousel fox fursona, was built in 2003 by Dogz and Thrashwolf. Later, a second version was constructed by ScribbleFox.[1][2]

Fay Fox is mentioned in the article All The Rage in the US, which appeared in the August 20, 2005 edition of FT Weekend Magazine. Covering Anthrocon 2005, the article constrasts Fay's real life with his putting on his fursuit and becoming "a gregarious carousel fox who gives rides".