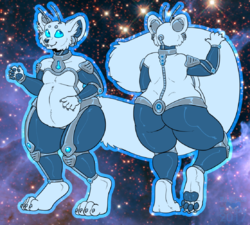 Farore Nightclaw (born 1986) is a polyamorous, asexual, panromantic agender artist specializing in fantasy, science fiction, and furry art who first started posting art online in 2004, but has been involved in the fandom since about 2002. Farore's pronouns are it, its, and itself or he, him, his, and himself. Its polycule is composed of itself, its long-distance partner Hale, its wife CassioBunny, and its metamour, CassioBunny's wife, P01D (who currently resides in the UK). CassioBunny and Farore live together in the furry household Strangehouse in San Jose, California, though Farore is Canadian by birth. Artistically, as well working on commissions, original artwork for prints or art show sales, and graphics for various pet sims, Farore likes creating resources for other furry artists and experimenting with different art styles. It also often works to create resources and support for the fandom in non-artistic ways, such as writing life advice columns, organizing and/or providing art for charity auctions and projects, and sharing information and resources related to BDSM, abuse survival, and mental health (among other things).

Farore is an anthropomorphic South China tiger robot, also referred to as 'the kittybot'. It is pictured to the right.

Farore was present at Howloween 2005, at Anthrocon 2007-2013, at Midwest FurFest 2006-present (excluding 2017), Further Confusion 2014-2017, for which it was a staff artist in 2016 and exec staff in 2017, BLFC 2014-present, and was a Guest of Honor at RainFurrest 2009 as well as an attendee in 2011. It will also be attending Vancoufur 2020, for which it has been a staff artist since 2019. At conventions, Farore is usually in the Artists Alley or Dealers Den, as well as the Art Show, presenting its work. In the past it has handed out pins for the #IllGoWithYou project, for free or by donation (with proceeds going to Trans Relief Project or Trans Lifeline), at its sales tables.