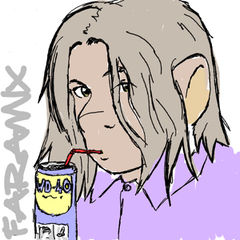 Fara, also known as Faramisz and DJ Faramix, is a furry artist, musician, writer and photographer. Having lived in Japan, and in the United States of America, Fara now lives in a remote point in Western Europe.

Fara is an androgyne, having very little physical gender distinction, and present themself at furmeets as either male, or female, or a neutral mix of the two.

Fara emerged into the furry fandom in late 2007, and became a more active participant in 2008 onwards, following on in a personal interest direction from previous involvements with manga and entertainment media.

Most of Fara's furry (and some non-furry) artistic outputs are submitted on their Fur Affinity account. However, Fara is more socially active on Yiffy International, where they are also site staff. Fara has an account on FurSpace, although it is unclear whether this is for themself, or an in-character account of their fursona.

They enjoy furmeets, but also tune, drift, and race cars for a hobby, which frequently means they have no way to travel to meets outside their area. Other hobbies include creative writing and conceptual design. As "DJ Faramix" Fara creates radio shows and music mixes, though these are not usually of a furry mien.

Although typically Fara's avatar in most of their web presence is of Becky Farrah (of Gunsmith Cats) their fursona is usually something different. They are a shape-shifter with no default form, in reflection of both Fara's tendencies of trying new things with artwork and other creativity, and their real-life propensity for changing their physical appearance and presentation.

Through the greater part of 2009, and into 2010, Fara's fursona was a female wombat X pine-marten, the permanence of which was alluded to by designs submitted on Fur Affinity of a fursuit based that fursona form, though the designs were removed shortly afterwards. Previous forms have included a female ocelot, and a male lion.