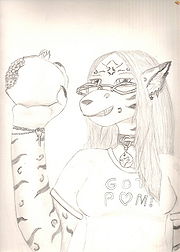 Failarhya (born July 29th, 1986) is a furry artist who lives in Dallas, Texas, U.S.A. Her fursona is a snow leopard/ferret hybrid. Due to time constraints, she was on hiatus in the furry world for almost two years, but returned in late 2007.

A lifestyler, Failarhya attended the first Texas Furry Con, Oklacon 2004, and attended AnimeFest 2005 in a costume she made herself, in the Cats style. Failarhya is also a member of the Lone Star Furs.

She has been furry since a young age but first found the internet community at the age of 14, She posted under the name failren a derivative of her fursona's name. She was a member of the now defunct TexasFurs. She also plays on Second life as the character Failarhya Amarula.

Failarhya as a name first came to her at the age of 8 and a lot of her friends call her by it instead of her given name.

Failarhya is also the inspiration and one of the main characters in the webcomic WeaselJuice. her friend liz began it by drawing pictures of Failarhya's fursona and eventually worked in real life happenings into the comic. The comic can be found here http://www.weaseljuice.com/ .

Failarhya with a plushie of her fursona.

Failarhya has a deviantART gallery, and does free commissions. She also creates custom plushies and tails and is also thinking of making the jump into fursuit commissions. Contact her to learn more.

Failarhya's tails are created from yarn sewn onto a fabric base, so they can be more easily customized than faux-fur tails. They are machine washable and with regular brushing retain their softness and fur like fluffiness. Failarhya generally puts 10 to 12 hours of work into each one. The name of her tail business is Soft as a Cloud Tails. Contact her to get a price quote, as she is just starting her business she is doing tails for the cost of materials. This is generally 15-30 dollars depending on size and color choices.

In february of 2008 she made her own fursuit. Upon completion she decided to start taking fursuit commissions. Contact her for more info.