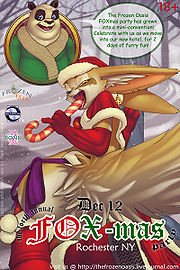 FOXmas was organized by Soron and Jaspian (under the former's sole proprietorship, the Kanouse Entertainment Group). It was to be 20th in the series of Frozen Oasis events, but the first aiming to be a standalone convention, developing from Christmas parties at Soron's house which attracted 55 furs in 2008.[2]

FOXmas' promotion had a decidedly mature tone,[3] and led to controversy both inside and outside furry fandom, ultimately resulting in the withdrawal of the Holiday Inn and the cancellation of the public event.[4][5] An invitation-only party was held instead, as in previous years.

FOXmas was advertised as 18+ to get in, 21+ to drink, allowing "skritching, hugging, lap sitting, kissing, and groping ... between consenting adults". A "non-denominational" Christmas theme was to be in effect, with music, carols, traditional movies, and the exchange of gifts. The media and mundanes were to be barred from convention space.

KnotCast members FuzzWolf (owner of FurPlanet), and Savrin (writer and head of Furry Fiesta's gaming track) were invited as Guests of Honor. Santa-level ($75) sponsors would have had access to a dinner with them.

Soft drinks were to be free, and over-21s who had paid for an "Elf" level ($25) or higher registration were to have access to free alcohol during the Saturday night dance party, with access to mixed drinks provided by the hotel bar at cost. Non-staff photography would not have been permitted in the Saturday night party.[2]

A fursuit bowling outing was also planned for Sunday afternoon, although the ~$14 cost was not included in registration.[2]

FOXmas' premise and promotional methods have been criticized by several people and organizations.

FOXmas became Something Awful's "Awful Link of the Day" on 14 October, with an encouragement to "stay the fuck away from the Holiday Inn" in December.[8] Shortly afterwards, the event space and room block were cancelled by the hotel.[4] FOXmas was subsequently re-featured as "Awful Link of the Day" with an update critical of event organizers' lack of forthrightness when negotiating its hotel contract, and the hotel staff's displeasure on becoming aware of the event's adult theme. Article contributors reported management as "appalled and extremely embarrassed", being misled as to who the attendees of FOXmas were, claiming that FOXmas was passed off as "a mini-convention of mascots" like Martin the GEICO gecko), and the nature of the events planned.[9]

As of 19 October a new venue had not been found, and pre-registration was suspended, leaving the future of FOXmas in question.[4] Ten days later, the event was cancelled and pre-registrants were refunded.[5]

Despite the controversy involved, Soron alluded to future plans of FOXmas, noting "there are several hotels interested in hosting us in 2010 even with the controversy that has ensued this month." [5] and hinted at a FOXmas 2010. However, in August Jaspian noted that the event would not be held as a convention in 2010.[10] Instead, the event was held as a private party over the weekend of December 11.[11]

In November 2011, FOXmas was announced as a small-scale private party to be held at Soron's home on December 10.[12][13] Attendance would be capped at 35 people, with IDs being checked at the door to ensure all attendees were 21 or older.

The theme of the party was "My Little Party: FOXmas is Magic", based on My Little Pony: Friendship is Magic, because ponies are "*the* stereotypical thing little girls ask for from Santa".[14]