The Fandom's Favorite Fursuit Fracas was a tournament for fursuits which ran from 2007-2014, created by Exile Huscoon and Rhett Foxcoon, and later organized by Stevie Maxwell. The tournament was formed to showcase fursuiters and fursuit makers that may not be as well known to the general furry populous.

Voting was performed between nominated fursuits on the LiveJournal community   fursuittourney and was carried out via a bracket format, with polls usually scheduled on Monday and Thursday afternoons. Entrants were randomly assigned to 16 brackets, known as "regions"; the winners of each region advanced to the Final 16 bracket. For 2008-2009, random preliminary matches were held to narrow the competition down to 256 fursuits. In 2010, double-elimination was introduced.

With the exception of 2011, anyone could nominate a fursuit. Several suiters entered two or more of their own suits into the competition, which was allowed provided that they nominated an equal amount of suits that they did not own; Magnus Diridian nominated 23 of his fursuits in this manner in 2008[1]; in later years a maximum of four to six suits per owner was instituted. All nominated fursuits had to be approved for use in the competition by their respective owners, and could be withdrawn by its owner before the final bracket is brought into play.

For the 2011 edition of the competition, only self-nominations were accepted (with a maximum of four suits per owner). It was also announced that the Fracas would be held every two years instead of every year[2]; however, volunteers were recruited to fill staffing levels and allow the Fracas to remain an annual event.

As a rule, the suit that won the competition was not allowed to compete ever again; contestants that made the Final 16 but did not win were still eligible to compete. The champions of the first four editions did participate in an exhibition match together, but when Flux bowed out after the first portion of the mini-tournament, Yippee Coyote was declared the winner of the special poll.[3][4] 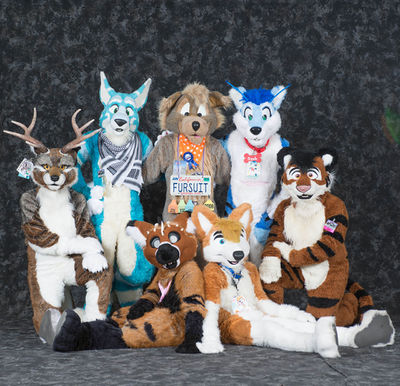 The first annual Fracas featured 176 participants and ran from June to September of its respective year. Frazzle won the tournament, beating second place contestant Sophie Cabra by 13 votes. Takala and Lucky Coyote rounded out the top four. Over 250 people voted in the final round.

The second annual Fracas featured 295 participants and ran from May to August of that year. Due to the sheer size of the entries, a preliminary round was conducted in April to narrow the field down to 256 competitors to fit the bracket.[5] The tournament's first ever tie came between Greifer and Junip Hyena, leading to a three-way battle between them and Beetlecat's RedXIII; Greifer prevailed by only 13 votes. Jäger would go on to defeat Greifer and take the winner's title. Over 500 people voted in the final round. Takala once again made the final four, alongside Neo PanTyger.

Nominations for the third annual Fracas began on Sunday, March 1.[6] The nomination process took just over a month, ending on Friday, April 3 at 11:59pm ET. A list of 326 nominated fursuits was announced soon afterward.[7][8] Voting on the first preliminary bracket began on April 13. The tournament ended on August 23 when Yippee Coyote was declared the winner, defeating Frisbee in the final round, with Leo and Beef Jerky rounding out the final four.[9]

Nominations for the 2010 installment of the Fracas began on Monday, March 8th, and closed on Tuesday night, March 30th, with nominees having until Saturday, April 3rd to opt out.[10] 384 suits were listed from 521 nominations, not counting 43 opt-outs.[11] The tournament was scheduled to run from April 5th until August 28th, with a one-week break between June 24th and June 30th for Anthrocon.[12] Frisbee reached the finals for the second year in a row, but was defeated by the eventual champion Flux, while Clementine won the third place poll and the privilege to pie Greifer at the subsequent Doo Dah Parade.[13]

Nominations for the 2011 installment of the Fracas began on Wednesday, March 23rd, and closed on Friday night, April 15th.[14] A total of 203 competitors registered for the tournament, which was scheduled to run from April 18th until August 22nd, with a one-week break between June 19th and June 26th for Anthrocon.[15][16] Server downtime delayed the last few polls by a week, but in the end Twitch Da Woof fell short by a handful of votes to the eventual champion Bucktown Tiger.[17] Two-time Finalist Frisbee joined Clementine as the other returning suits to the final four.[18]

Unlike previous editions, the 2012 installment of the Fracas was split into three phases.[19] The Nominations phase began on Monday, February 27th, and closed on Friday, March 23rd, with nominees having until Saturday, March 31st to opt out of the other two phases. The Showcase phase started on Sunday, April 1st, saluting all fursuits who received at least one nomination to be appreciated by the community without any pressure of competition, and ended on Thursday, April 12th, at the deadline for nominees to opt in to the voting bracket. The Tournament phase ran from Monday, April 16th until Saturday, September 1st, with Howee Husky emerging as the winner over Beef Jerky. A total of 271 nominees were featured in the Showcase phase, with 186 competitors registering for the Tournament phase.[20]

The 2013 edition of the Fracas followed last year's model, starting with the Nominations phase that began on Sunday, March 3rd, and closed on Sunday, March 31st. The Showcase phase started on Tuesday, April 2nd, with fursuits that registered for the competition, allowing other nominees until Friday, April 5th, to opt out of being displayed. The remainder of the Showcase continued until Thursday, April 11th, with the deadline for nominees to opt in to the voting bracket set for Saturday, April 13th. A total of 231 nominees were featured in the Showcase phase[21], with 152 competitors registering for the Tournament phase.[22].

The Tournament phase ran from Monday, April 15th through to Sunday, August 25th. Unlike the double elimination formats of the previous few years, the first six weeks were completely non-elimination match-ups featuring numerous requested face-offs between competitors among the random match-ups. Some of these match-ups were given descriptive taglines or honorary titles to be bestowed upon the winners, with the results of these face-offs providing the seeding information for the eventual Regional Elimination bracket. Telephone emerged victorious in the Championship Match against first-timer Albi Azul, with last year's runner-up Beef Jerky and another rookie vulpine Orlando Fox rounding out the final four.

The Tournament phase is slated to run from Thursday, August 21st, through to Saturday, November 1st, starting with the Non-elimination phase featuring numerous requested face-offs between competitors among the random match-ups. Some of these match-ups were given descriptive taglines or honorary titles to be bestowed upon the winners, with the results of these face-offs providing the seeding information for the eventual Regional Elimination bracket. Doctor Fox and Leon were tied on 130 votes and declared joint champions, with Torq taking third place over Spazz.

Although there was no announcement, this ended up being the last Fracas. Responses this varied from blaming the demise of LiveJournal, drama inherent to popularity contests, and both regret and thankfulness at its demise (the latter from Exile Huscoon himself).[23]

FFFF received criticism from several in the fursuiting community, labelling it a popularity contest with newer, more fanciful fursuits nearly guaranteed to win. Several fursuiters chose not to participate in response, vetoing any nominations for their suits to appear in the tournament. As a result, for the second Fracas in 2008, it was made clear to place a vote based not only on the appearance of the suit, but also on its character, individuality and performance.[24]

The 2007 brackets, named after the 16 most nominated fursuits, also received some allegations of favoritism. From 2008 onward, the regions were designated with different themes to avoid any misinterpretation (ie, the teams in the 1973-1974 NHL season, the major islands in the Caribbean, the teams of the 2010-2011 National League, etc).