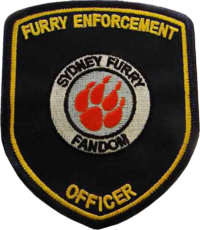 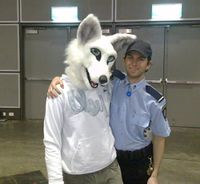 Diego and Timon b

The Furry Enforcement Agency, also known as F.E.A. ("Fighting for a Better Fandom"), is a small group of furs in Sydney, New South Wales, Australia, who purports to "perform the honorable role of policing the wrong-doings of fursecution and drama in and around the Australian furry fandom" and "Investigate differences inside the fandom, and to monitor local activities."

The group is also known to have been the source of furry related friction.[citation needed]

Along with Timon b, Jacora F.E.A. is also composed of probationary and intel officers,[citation needed] and two non-furry operatives (Redshirt and D'e'M'o'N'i'c), representing the agency in the states of Queensland and Western Australia.

The F.E.A. uniform consists of the following items:

F.E.A. is redesigning their current uniform, as it can be easily mistaken for that of the NSW police forces.

The F.E.A. also has specialized equipment such as surveillance and reconnaissance gear, limited crowd control equipment,[4] and an assortment of EMT supplies.