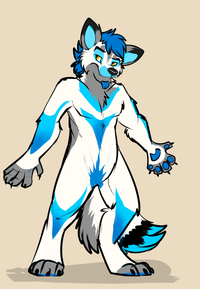 Eylof Lucky Wolf (born February 2, 1994) is an Afrikaans-speaking South African fursuiter who lives in Cape Town. He became a furry at a really young age[when?] and officially joined the fandom in 2014 when he found out that South Africa has a furry community. As of January, 2015, he is dating another South African furry; Totem Tiwote.

Eylof's fursona is a blue, white and grey wolf. Eylof's fursona changed twice[clarify] before he settled on the one you see now. He has a few other fursonas,[clarify] but they are only for the fun of it.

Eylof acquired his fursuit in January 2017.

Eylof has been part of the ZAfur.co.za group since mid-2014. He enjoys spending time with fellow furries, animals, and helping out in the community. A novice YouTuber, he is also one of the "Assistants and sponsors" for Kero the Wolf's channel on YouTube.

Eylof's favorite hobbies are flying RC aircraft, fishing and fursuiting. His idols in the furry fandom are Shane Deepwood, Kero the wolf, Majira Strawberry, and Telephone.