Exterminatus Now is a webcomic drawn in Sonic-style, following the adventures of two Inquisitors, a mercenary, and a daemon hunter as they fight the many evil and dangerous creatures that inhabit the world of Mobius. It is written mostly by Garry "Lothar" Webber and drawn by Alan "The Virus" Graham, with contributions by Martin "Silversword" Faulkner who acts as webmaster and Stuart "Eastwood" Edney who acts as administrator.

The comic and its setting is a parody of a fan project[1] which tried to create a new Mobius with a deeper backstory and history; a full mythology, political and social set-up. The project has been underway for years with no sign of completion.

On April 4th, 2015, artist Alan "The Virus" Graham announced that Exterminatus Now would soon be ending its run after 12 years, and that the current running story arc would be its last, citing that the staff have become too weary working on the comic, and the desire to move on with other projects.[2] The last story arc strip ran on August 5th, 2015 with a brief epilogue planned in the following October.[3]

Harold Quentin Eastwood
A grey arctic fox Inquisitor who suffers from a severe addiction to coffee. He can be extremely quick and agile when he feels it is necessary, but this is usually only when his well-documented arachnophobia comes into play. He claimed early in the comic that his nickname is "Dirty Harry", but nobody has ever called him that name — even if one of the reasons he got that nickname (his smell) was acknowledged and mentioned by other characters. He also has one of the world's largest collections of pornography due to his failure to get a girlfriend. However, the collection is so large, it flooded half the memory of the CABAL network and it had to be shut down for a week. 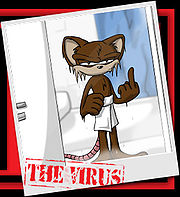 Syrus "The Virus" Zuviel
A brown rat, and one of the two Inquisitors, along with Eastwood. To call him incompetent would be unfair, as Virus is actually very good at what he does. Unfortunately, what he actually "does" has yet to be determined. A career underachiever, he has about as much self-motivation as a Fernexite has social skills. He is calm and collected, except under pressure when it counts, and while possessed mostly of good intentions, he is either too lazy, cowardly, or just plain idiotic to follow through. 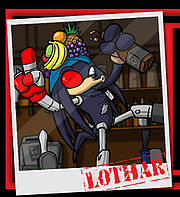 Lothar Hex
A quick-tempered cyborg echidna hired by Virus and Eastwood. With warrants for arrest on almost every continent, the Inquisitors probably could not have picked a less appropriate agent of justice. However, by being officially inducted into the warband of an inquisitor, Hex has been acquitted of all crimes to date, and is therefore exempt from punishment. Also he has a history of being taken by a group of scientists who created him and taught him how to be violent. According to Page 370, he escaped before he had the bionics and has no memory of what he was and what happened to him. This would mean that he received his bionics after he got captured again and was told about his origin. He worked at The Cesspool and also has a father (despite Rogue's, Eastwood's and Syrus's disbelief.) 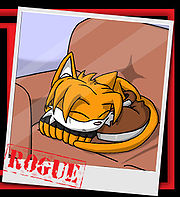 Ryoushi "Rogue" Nekittou
An orange Daemon Hunter cat that uses a beam sword as a weapon. Though quite powerful, he is extremely serious, cocky and tends to over-estimate his own abilities. (An important note to remember is that Rogue does not in any way represent his creator, Silversword, as many readers assume.) Rogue is generally regarded by Schaefer as the only half-way competant let alone sane, member of the team. He and Lothar can't stand each other and reguarly trade insults.

A badger who was a former member of the Mobian Inquisition and former friend of Eastwood (though their friendship seems questionable). Until, the day when during a mission, Morth's right eye was stabbed out. After that he became obsessed with studying the occult, soon became a full-fledged occult leader and attacked the Inquisition. After that Eastwood swore revenge upon Morth.

Blasphemy
A chao that evolved into a daemon-creature after coming into contact with one of the creatures. Blasphemy is Virus’s personal pet, and has a knack for terrorizing Inquisitor Eastwood. He has also developed a kind of mutual understanding with Lothar (though neither would ever admit it).

Commander Antonius Schaefer
The commander-in-chief of the Mobian Inquisition. A sizable grizzly bear, he appears to get his kicks out of sending Virus, Eastwood, Hex, and Nekittou out on exceptionally dangerous missions and sometimes makes it obviously clear that he doesn't expect or want them to return. Apparently, he also has a bizarre fetish for chickens, which Virus used to blackmail him in order to obtain a private lodging.

Riktor Simmons
Schaefer's assistant and adjutant stoat. While feigning respect, he occasionally does manage to get a leg up on his superior. Recently, he became the temporary head of the Mobian Inquisition after an assasination attempt on Commander Schaefer.

The Toaster
Eastwood's toaster is often possessed by a daemon force, and repeatedly attacks him and the others. Even though they replace their toasters often, they still end up possessed over and over again.

Jamilla "The Elusive Camel" Townsend
A female penguin that works for the Mobian Inquistion as a covert agent. She has a rather odd codename of 'elusive camel', the reason being all the good codenames were taken and it was either that or 'urinating flounder'. Many sexist jokes of the series are made around her (one reason why she refused to join the team when offered).

Yuri "Wildfire" Keila
A young white female cat who was trained by the same group of Daemon Hunters as Rogue. She is described as "a combat prodigy", but is so bad at tactics that during a fight she often causes more bad than good.

Kyle Craven
A young Platypus and, surprisingly, Lothar's younger adopted brother. He was charged with selling weapons to Dark Cultists without knowing, and in doing so ended up getting arrested and beaten by the Inquisition. When they felt what he told him about 'not knowing about the cult' wasn't true, they send in Lothar and his team to do intensive interrogation. But once Lothar saw that it was his brother he (finally) attacked Eastwood and took him as hostage. Right now he is under Lothar's watch to find a 'middle man' in the arm supplying invstigation.

Steve
An old, tough raccoon and founder of The Cesspool where Lothar previously worked at and also his adopted father. He formerly worked at the Rodinian Army and became a Mercenary afterwords. It was after he completed his mission when he met Lothar, who stumbled into his camp all bloody at the time. Thinking he was a wanted criminal, he tied him up and loaded him on the truck. But after breaking free, Steve saw some potental in the tempermental echidna and took him under his wing. A year later he started The Cesspool with an old army friend and later met Kyle in an abandoned village. He still currently runs The Cesspool.

In the series there is a group of gods relating to Mobius mythology. They are divided into two groups: the Good Gods and the Dark Gods. Each of the groups is normally seen spending time playing and arguing over games such as poker, Monopoly and Dungeons and Dragons.

Gruss
A machine god that looks like a tortoise.

Tyrus
The god of law. He is a lion with a mane of fire.

Ahriman
The god of knowledge. He is an owl wearing glasses.

Mort
The god of death. He is a raven with a black cloak, similar to the Grim reaper.

The Soulthirster
A snakelike god who is the representation of temptations such as lust and wealth, and is a corrupter of souls.

The Hound
A doglike god of war and anger who wishes to destroy everything.

The Patterner
A god of fate with a giant floating eyeball who entraps people with bad luck and deceit.

Eastwood explains to readers how Exterminatus works. One of the many references to Warhammer 40,000.

Exterminatus Now has many references to the Sonic the Hedgehog series. The setting is the same Mobius referred to in the English-speaking video games. Lothar resembles Knuckles the Echidna, in that he is the same species and last of his kind, while Eastwood bears a passing resemblance to Miles "Tails" Prower - much to the artist's irritation. Chao like Blasphemy were created in Sonic Adventure - and, in one comic, Lothar tells how he was turned down from appearing in the Sonic games in preference to Shadow the Hedgehog just because he wasn't a hedgehog - much to his irritation.

There are also plenty of references to Warhammer 40,000; the name of the comic itself is taken from Imperial doctrine. Lothar Hex's name is also directly "borrowed" from a well-known 40k character. Early designs of the Inquisition emblems (Which, as of writing, are undergoing minor redesigns), the original design of the "Spectre" gunship which had more than a passing similarity to the Thunderhawk Gunship employed the Space Marines, and it can be argued that some of the daemons seen thus far are more than just inspired by the ones that inhabit the game-worlds of Warhammer and Warhammer 40,000. Again, many are undergoing redesigns.

In addition, there are a handful of references to the works of H.P. Lovecraft, notably Cthulhu, although other, more subtle, references have surfaced throughout the comic.

Finally, there are the almost mandatory references to Star Wars, comic books, and video games, amongst others.