Exodus - furry rebellion is a web comic by Pepper, a UK based science fiction and webcomics fan. It is divided into episodes and series like a television show. The comic strip is updated weekly, currently on a Wednesday. It is rendered using Poser and then edited and composited in Photoshop, where the lettering is also added.

The comic has been in colour since the beginning, although there has been some experimentation with layout. It began running in March 2004.

From episode six (Footprints) the comic went to a new, more 'comic book' style, with a more dynamic layout and a very different look to the graphics. While it's still in the learning stage, the changes will also make a printed comic more likely.

Note: as from October 1st 2007, Exalted is on Hiatus until further notice. 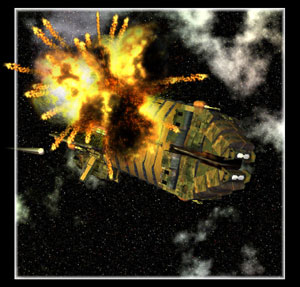 Exodus began when Pepper, who had played with Poser for some years, decided she wanted to produce something more substantial than the portraits of role playing characters she had been doing. Posting "I want to start a webcomic" to one of the Furry bulletin boards and receiving no coherent offer to provide the writing, she started doing the whole thing herself. A later attempt at collaboration with a writer did not go well and the current story developed in a somewhat haphazard fashion as Pepper learned on the job.

Many of the characters in Exodus are based on Pepper's friends in the Role-playing game Furcadia. Many can still be found there, and can be met at the The Pink Pussy Bar which is run by Pepper's friend Foxy Malone.

Exodus tells the story of a group of artificial people or bioroids derisively called "Furries" by their human creators. The plot assumes that sometime during the 21st century a judge hearing a case needed to define how a being could be classified as truly human - his decision to base this on the percentage of original human DNA passed into law and was used by later manufacturers to produce beings who were legally "property" rather than "people". The concept is heavily based on ideas from the film Blade Runner and the Role-playing game Transhuman space. The characters in Exodus are attempting to win their freedom, and the personalities of some are loosely based on historical figures such as Martin Luther King Jr. and Malcolm X. A general unease with portraying anything which could be considered a form of terrorism led Pepper to decide that their general approach would be one of non-violent protest such as that advocated by Mahatma Ghandi.

Much of the background and assumptions have been written up in the extensive forums. This has been something of a problem as occasionally the story may be difficult to follow for a reader who has not browsed this background information. From its original concept of Blake's 7 with Furries, the comic has begun to change more to Firefly crossed with Star Trek: Voyager. At the end of 2005, the cast escaped from the Terran controlled solar system in a cobbled together starjump capable freighter, and the emphasis of the most recent strips has been in the exploration of alien worlds as the cast search for a safe home.

Violence is shown more graphically in the story: characters die, and their deaths are not usually hidden unless exceptionally gory. The webcomic is a story, and does not have an (intentionally) funny element to it.

Episode one - Calico's Story introduces Calico, being transported to the EonCop base on Luna after her ownership change. The shuttle she is travelling on is attacked by a group of free bioroids and she is taken along with them. At the end their leader Reuel reveals that their target was not actually to liberate Calico, but to steal information being transported on the shuttle. Calico is offered the opportunity to join Reuel's group and accepts. Characters introduced: Calico, Carla, Regis, Foxy, Reuel, Roqi, Cindi.

Episode two - Rats in the walls begins with Calico having decoded the stolen data and explaining its content to the others. It is revealed that EonCorp has been intercepting the data sent back to Earth by the Scout service, and changing important bits before it gets passed to public databases. The data the furries stole is a copy of the real information, before the changes were made. Reuel sends Calico and Carla to Earth to talk with an ex-EonCorp employee who may know more. Their route takes them through the orbital colony of L5, where they run into both an EonCorp assassin and a different rebel bioroid group. Characters introduced: Sinopa, Renn, Lira, Curvia, Amy, Albarez, Diogenes, Rajira.

Episode three - Down old London Town follows on from Calico and Carla's flight from L5, with the survivors of the attack by Heaven McKensie, the EonCorp super-assassin. The characters are in London, attempting to contact the ex-EonCorp employee who they hope will have more information on what EonCorp are doing. However the contact is already under observation, and Calico and Carla walk into trouble. A chase ensues through London, ending with Curvia's team destroying several police mechs. The group escape off world. Characters introduced: Carla's parents, Fyber, Specter.

Episode four - On the Rocks begins with the group nearly back at Reuel's base. However the spy has revealed its position and the Navy has the base under observation. Calico has put the clues together and reveals the identity of the spy, but not soon enough. The Marines invade and several of Reuel's team are killed before the base is evacuated. Reuel sacrifices himself to give the others time to escape, loaded into an old freighter refitted with a black market jump drive. Characters introduced: Sashi.

Episode five - Orbital Decay begins as the crew come out of their first hyperjump and find themselves in another star system. Curvia and Foxy argue over their next action, and Calico reveals her control over Diogenes to resolve the situation. Travelling to a scout base in the system hoping to find supplies and repair their ship, the bioroids discover an unknown ship docked there and the crew of both station and ship dead. Looking for the spare parts they need, they discover the source of the carnage and the prize they were fighting over.

Episode six - Footprints follows on from Orbital Decay, with the crew taking stock of their situation after the orbital station is destroyed. With their ship damaged and supplies running low, they decide to risk a landing on the alien planet below to scavenge the abandoned scout base. Of course, this is the homeworld of the Grendel they fought on the orbital station, and there's more here to be discovered than just spare parts.