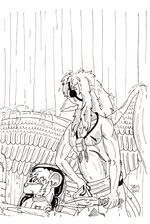 Exile of Granaal after the Battle of the Western Wall

Exile of Granaal is an Avian character from Joshua the Samurai's furry fiction novel The Shulamite. He was created long before The Shulamite was written and was one of the oldest characters in the series. Exile is an older man, and has spent most of his life as a Shaman for the avian peoples. He is a healer, a spiritual leader and a powerful warrior. Exile was trained in Kaparjutsu under the same Master as T'shelle. He carried a Kapar named Cloe, and a number of other weapons of Avian origin. Exile is also adept in an avian wrestling technique that makes his deadly even when completely unarmed. His father Teneb was an Avian warlord who fought many battles under Shalia of the Firebirds. Exile's father rebelled against the firebirds, tired of their policies and proclaimed that seven generations of his descendants would be given to God, hence Exile's service as a Shaman. Exile is a close friend of T'shelle, the two having fought many battles together and even may have shared a romance. In his many battles Exile has collected a number of visible scars including a chip on the left side of his beak, and a missing eye covered with a leather patch. He is a personable and friendly man, but is ultimately haunted by the loss of his wife and daughter during the Ketchitan war. When not in an official function, Exile owns a wheat farm in his home city, and hopes to soon retire there after finding a new Shaman for his people.