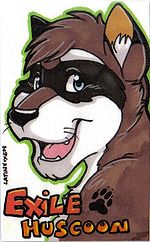 Exile Huscoon (born December 17, 1981 in St. Marys, Ohio) is a furry from Celina, Ohio, residing in Bensenville, Illinois. His fursona is a "huscoon", a cross between a husky and a raccoon. He also has a second character, Casanova, who is a red panda.

Exile is an alum of The Ohio State University with a bachelor's in Actuarial Science. While at Ohio State, he also worked for the university's athletic department as an intern for the Big Ten Network and was a broadcaster for Scarlet and Gray Sports Radio. Exile is licensed by the OHSAA and IHSA to officiate American football, baseball, and volleyball. He has been umpiring baseball since 2001, officiating American football since 2008, and volleyball since 2016.

Exile owns a fursuit of his primary fursona, constructed primarily by Arend Studios.