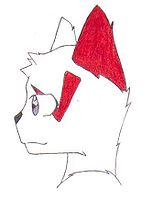 Zack the Zangoose on FA

EvilPurity, more commonly known as Zack, is a furry artist and member of the furry fandom. He has two different fursonas, one on deviantART and another on Fur Affinity. He has also made several different story characters.

Of Zack's two fursonas, the one most-used is Zack the zangoose on Fur Affinity. Zack was turned pokémorph after being abducted by Team Rocket and becoming the victim of a cruel experiment. Since escaping the Rocket facility, Zack has adjusted to being a pokémorph and is beginning to enjoy it. He has also discovered his true sexual preference, bisexuality.

Shean David is Zack's fursona on deviantART. Shean is a black and white wolf with blue hair and red tips. He is brother and best friends to the characters Mark David and Gordy Scott.

Zack has made two fully functional characters that he uses repetitively with his fursona Shean.