Everyone Else Has Had More Sex Than Me

From WikiFur, the furry encyclopedia.
Jump to: navigation, search
Culture > Animation > Animations > Everyone Else Has Had More Sex Than Me 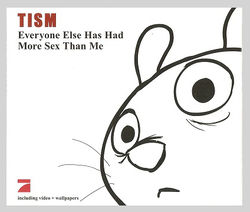 Everyone Else Has Had More Sex Than Me is a song by the Australian band TISM which appears on their three-disc set The White Albun.

In the animated flash video of the song (made by former Australian Disney animator Bernard Derriman), it is sung by a white rabbit with the number 1 on his chest. Other white rabbits can be seen at various times in the video, all with numbers on their chests which we assume represent the number of times they've had sex; one has a 3.5 (!?) and some have quite large numbers. The only character who's number is lower than that of the protagonists' is a balaclava-clad rabbit playing keyboards with a number 0 on his chest. This is a reference to the band, as they wear masks on stage, and more specifically, a reference to keyboardist Eugene de la Hot-Croix Bun. The lyrics pose the question, Does anyone else get that feeling?, implying that the sentiment expressed by the title may be more perception than reality.