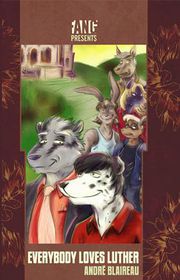 Everybody Loves Luther written by André Blaireau. Cover art by Grimal
The cover art is by Grimal.

Luther Coachman, a gay Dalmatian with all the sweet charm of his tribe and an undergraduate at Whiskey University, is kicked out by his jock roommates when he's outed by a bitchy queen. He turns for help to an acquaintance, Adrian Drew, a math professor at WU, who agrees to take in the Dalmatian for the semester. To the middle-aged badger's consternation, the young man's friendship turns into something else.

Their lives are turned upside down when Hayward Dench, an old friend and former lover of Prof. Drew's, is murdered. Prof. Drew finds himself the guardian of Hayward's teen-aged son Alexis, at least for the ten days or so until the boy's mother returns. For Prof. Drew, the murder of his old friend not long after the death of his lover is serious blow, but there is more to come--now that there are two young men living in Casa de Drew.

Everybody Loves Luther is followed by El Burrito de los Muertos, also by André Blaireau and published by Bad Dog Books in November 2007.