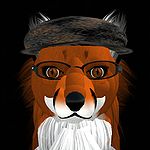 EveningStar Foxworth aka John Burkitt is a furry author. He is on Second Life as EveningStar Writer.

Chronicles of the Pride Lands[edit]

Yes, that John Burkitt. All right, he wrote Chronicles of the Pride Lands, sometimes known as COTPL by hardcore fans. If you are a Lion King fan, you either hate it, love it, or are from that long awaited lifeform that built the face of Elvis on Mars. He got so tired of hearing about it that he basically disappeared from Central Africa, lock stock and keyboard. Problem is he had an obsessed fan. That's not the funny part of this article, and it wasn't a funny part of his life. He has many fans and he loves them all, but not when they stalk him. Really. In those days he was a jaguar, also known as "Chakal", "Da Jaggie" or "Sthpotmeister". He had several catch phrases, most notably, "Like, purr, man." He's been spotless now for nearly a year. It took months for him to dry out the last of the rainforest after he stopped "jaggin". Admittedly he still visits amazon.com, but only to buy things, not to swim.

Needless to say he loves real life jaguars and other large carnivores. Not surprisingly he works with them. Surprisingly--or not surprisingly--he went way overboard. He still is. He wouldn't live any other way. For years he was board chairman of Tiger Touch, Inc. of Fallon, Nevada (http://www.tigertouch.org). He is still on the board, serving as Webmaster and Educational Director (yes, I have ED!), and also giving free webwork to many other exotic animal nonprofits. He is the author of the secondary school curriculum "Operation Survival 21" and, long ago, the "World Mammalian Taxonomic Encyclopedia". His formal training was in animal behaviour.

Byron on Wells and The Dancing Lawn[edit]

He is a co-admin of the NarniaFans forum The Dancing Lawn (http://www.narniafans.com/forum). He also wrote the furry novel Byron on Wells.