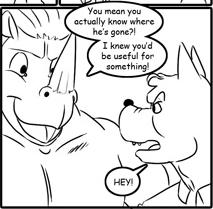 Européen Chateau, also known as EC, is a comic written by Birdy and Frenzie. Birdy is responsible for illustrating the comic. This comic can be found on Fur Affinity under Birdy's account.

EC is set in a remote part of North France in a forest referred to as the Thionville Forest. Boss, a foreman and husband-to-be leaves his fiancée to help renovate an old European Castle. Boss will be separated from his wife for 18 months. Working alongside Boss is Fletcher, Mouette and Crocker: A rhino, seagull and crocodile respectively. While working on the castle the four stay at a Vihara maintained by a grumpy, old Buddhist named Ed.

Boss becomes frustrated after several weeks away from his fiancée. His anxiety is exacerbated whenever his fiancée writes to him revealing that she has slept with other men. Boss reveals that he doesn't love his wife to his sympathetic friend Fletcher, but instead agreed to get married because her father was wealthy.

Boss is a foreman from Belfast. He's a long way from home and a long way from his fiancée. Boss struggles with sexual frustration and confused feelings of attraction while under pressure to renovate an old Castle.

Fletcher is a rhino construction worker. Little is known about him except that he's homosexual. Fletcher finds himself often being used by his sexual partners; they are straight men looking only for a little bit fun.

Crocker is an enigmatic figure. He's cool and confident but never talks about himself. His past is a mystery and he often sneaks out at night. No one knows where he wanders to.

Ed is an old Buddhist monk who maintains the Vihara that the rest of the characters stay at while they're not working. He's a surly fellow with a short fuse that seems to have a grudge against Boss.

Renard is a young fox. One day, out of the blue, Renard showed up with a rifle in his hand. Ed allowed the young fox to stay at the Vihara. But Boss doesn't trust Renard.