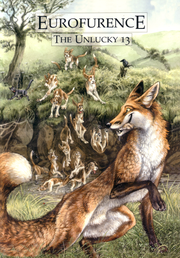 The cover of the Eurofurence 13 conbook.

Eurofurence 13, "The Unlucky Thirteen", is a European furry convention that was held from the 5th to 9th of September, 2007 in Europe at the Ringberg Resort Hotel at Suhl, located in the Thuringian Forest of Thuringia, Germany.

Upon entering the Ringberg Hotel in Suhl. Guests were greeted by a bright flashing sign reading: “Welcome to Eurofurence The Unlucky 13” The style of it was that you would typically associate with Vegas! Leaving no doubt in the mind you were in the right place. Though the theme revolved around casino's and all the glamour that went with it, gambling with real money was discouraged.[1]

Unfortunately, Steve Gallacci was unable to attend, so some of the programming had to be cancelled.[6] However, he was re-invited as a Guest of Honour for Eurofurence 14.

This year was the first time a charity event involving multiple items had been organized. 1814€ was raised for a local zoo (the Waldzoo Offenbach), mostly through the sale of fursuit heads from Lance Ikegawa, decorative life-sized stands from various artists, plushies, comics, posters, and a few other hand-crafted items. [7]