eurofurence is a family of freeware sans-serif fonts developed by unci. Originally created as a bitmap font for EuroFurence 1 in 1995, the TrueType and Type 1 versions were developed in 1998 and first used for badges at EuroFurence 4.

Based on a geometric design with rounded stroke ends, the font family was influenced by the TeX typeface Malvern designed earlier by Slate. The use for badges, signs and printed matter at furry conventions is encouraged by the designer. Generally it's best for short texts - for anything longer, there are other, more legible typefaces. 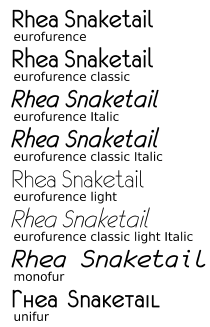 A comparison of the eurofurence font family.

Members of the family include: