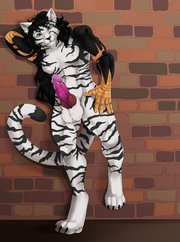 Etrius posing on a rooftop with his plasma sword

Etrius vanRandr is a furry fan who lives in Maine, USA.

In real life, Etrius is a PMC member by trade. He builds and sells computers as a hobby, and he drives a modified 2006 Toyota Corolla.

Etrius has stated in comments on Twitter that he builds personal computers as a hobby, plays video games, and likes to do outdoor activities such as hiking.

Etrius has been shown to have very strong opinions and defends them vigorously. During civil discussions, he has shown to be quite intelligent and knowledgeable in a variety of subjects ranging from history, mathematics, philosophy, and science topics ranging from modern electronics to mechanics.

Despite having a confrontational and opinionated personality, he donates money to St. Jude's Children's Hospital every month, stating on his Twitter that he doesn't need the money.

Etrius has stated on Twitter that he is "straight for humans, bi for furs."

Etrius's fursona is a cybernetic white tiger chimera approximately 7'7" (2.3 meters) tall, with cybernetic arms, green eyes, and long, flowing black hair. He is artificially built out of many different existing animals. He has a titanium skeleton and various other artificial enhancements. Etrius's heart is from a horse, his lungs are from a giraffe, and his digestive system is derived from a great white shark. His genitals are a mix of canine, feline, and serpentine parts, with a feline sheath and shaft, a canine knot, and a serpentine/equine glan, with an overall length of about 13 inches, and the knot can expand up to 8 inches in diameter. The glans features a flare and spines, the purpose of which is thought by biologists to be to scrape competing male's semen out of the female. His semen is black without any apparent reason.

Etrius's fursona goes by the same name he does in real life, with the full name "Etrius vanRandr", with a distinct lack of a middle name.

Etrius was a United States Armed Forces officer serving overseas when he developed untreatable cancer from being stationed too close to a radioactive materials processing facility. Before his death, he opted to be reported as KIA and had his body donated to science.

His body was then salvaged by a rogue former USSR scientist that was exiled for unethical experiments. His memory was erased and his brain was used in creating a cybernetic animal/human hybrid, now known as Etrius's anthro form.

The rogue scientist's facility was raided by the Russian Special Forces and Etrius was left in his cryo cell for another ten years before the facility's backup generators failed, releasing him with no memory of himself or his history.

Etrius was created with the idea of a perfect assassin, however, further augmentations to his body were postponed due to the facility raid. After waking up with amnesia, he wanders through the facility discovering many dark secrets about him and his past. He also discovers a prototype two handed sword that uses plasma for a blade.

After leaving the facility ruins, which are located in a forest in Siberia, he is captured by Special Forces who were somehow alerted to the release. Etrius manages to escape from the Special Forces vehicle and travels alone towards Germany, where he first meets another augmented anthro like him, a red fox named Zoey Lavender, who was created in a similar manner by the Germans.