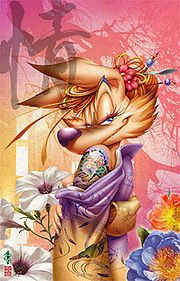 A sample of Eshimasa's kemono art for CoMix Wave magazine

Eshimasa (real name: Masami Esaka [エサカ マサミ]) is a airbrush artist born in Nagoya, Japan, and living in Yokohama as of 2007.

Starting as a freelance illustrator for Toyota in 1987, he later own created his own art studio, Team Esaka co ltd. in 1999. He has designed characters for campaigns, goods, and magazines, specially for WAVE publishing.

Although his western style art is a combination of industrial, graffiti/urban and Ed "Big Daddy" Roth influences, it is his kemono art (or, as he call them, "Impersonated Animals") that has attracted the interest of fans in the furry fandom.

Eshimasa is designing main characters as animals for an anime series, Love and Earth.