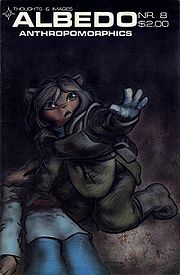 Erma Felna: EDF is a furry comic book story series created by Steve Gallacci for his own title, Albedo Anthropomorphics.

The settings in a futuristic period in a sector of civilized outer space populated by sapient and predominantly humanoid versions of over 150 various mammalian and avian species. Although the civilization has advanced technical skills and political structure, the residents of this region have realized that they have no knowledge of their origins or past, nor any culture or arts to speak of beyond the structures necessary to maintain operational systems.

The title character is Erma Felna, a young cat who is an officer of the Extraplanetary Defense Force (EDF), which is the main military of the Interstellar Confederacy or ConFed for short. The series follows her adventures in part as she fulfils a career that would make her a revered name in the region's history despite sexist opposition.

The ConFed is challenged by a rival and ruthless enemy called the Independent Lapine Republic (ILR) which is populated by species supremacist rabbits who favor taking colonies and settled areas by force.

In addition, there is internal and growing ConFed corruption and attacks by nihilistic terrorists who commit acts of violence for their own sake to shake societal complacency. Furthermore, a derelict ship that contains a body of a human is eventually discovered which reveal vital clues about the civilization.

This series drew considerable attention for its unique use of funny animals which featured this kind of characters engaged in sophisticated stories that have a highly political nature which was inspired by novels like A Very British Coup. For instance, after an action scene, the characters would often discuss the socio-political ramifications of the events in question and struggle to decide what to do in response.

In addition, the content contained an unprecedented amount of realistic violence and sexuality that was intended not to be exploitive.

A request to draw Erma Felna naked with a crowbar evolved into one of the longest running inside jokes in the furry fandom.