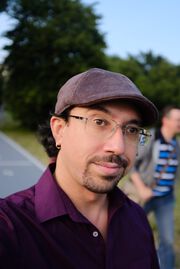 Khaki in the Netherlands, 2020
Khaki (who formerly went by Alex F. Vance) is a furry photographer and podcaster. Previously known as an author, founder of the publishing house that originally bore the name Bad Dog Books, founder of the furry fiction archive FurRag, design lead for SoFurry during its transition from Yiffstar, and producer and author of the Ursa Major Award--winning graphic novel series Heathen City.

In early 2006, he began suffering from repetitive strain injury, causing him pain in his fingers which required him to substantially moderate his typing. He announced his intention to put FANG on indefinite hiatus in order to let his fingers heal. With the help of Ben Goodridge, he founded Bad Dog Books in July 2006 and resumed development of FANG, which also made its publishing services available to third-party authors interested in bringing their works to print.

Until the deterioration of his fingers, Alex was an avid writer. Between 2004 and 2005, he wrote nineteen chapters of a serial story called Maranatha, totalling nearly two hundred thousand words. Besides occasionally contributing stories of his own to FANG, his fiction has appeared in FurNation Magazine issues 9 & 10 and Heat volume 4 from Sofawolf Press. His new graphic novel Heathen City, illustrated by Ayato, Distasty, Krahnos, Charha and Fel, was released on June 26 2008, with the subsequent issues released in 2009 and 2010.

Khaki first attended Further Confusion 2008, where he gave a series of four writing panels, continuing the Bad Dog Boot Camp panel started by Ben Goodridge at Anthrocon 2007. He has been guest of honor Rusfurrence 2013, JFTW in 2015, and CeSFuR in 2019.

His first podcast was BDB_Podcast, intended to promote Bad Dog Books' authors, which podfaded by 2008. He later helped Skip Ruddertail and Toonces start the Bad Dog Book Club, a story-reading and review podcast, to which he contributed several recordings. In 2018 he started the furry-adjacent show Cover My Ass with Kensaro, in which the hosts pretend to review books they haven't read, improvising an imagined plot for the book based purely on the cover. In 2020 he started The Voice of Dog, where he narrates upbeat furry stories.