Erica Starfox, also know as Foxy, is a character in Extinctioners. She first appeared in Extinctioners volume 1, issue 1 (story and pencils by Shawntae Howard, inks by Malcolm Earle, and color by Eric Blumrich and Scotty Arsenault). 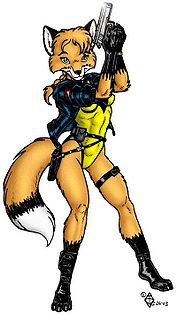 Erica "Foxy" Starfox is the younger sister of Scarlet Ann Starfox of the Extinctioners. Unlike her older sister, Foxy has no powers. But, this lack of powers does not mean she's helpless. Foxy is a very crafty and intelligent young female, with grades that put her at the top of her class in the Solar Academy Military School. She uses her wits to solve problems rather than brawn. Foxy is a skilled astro-navigator with a savvy for technology and computers. She's also a skilled pick pocket and code breaker (skills she acquired doing things her parents would not be very happy to know about). Aside for that she's a skilled marksman and loves weapons. She is currently engaged to Sly.