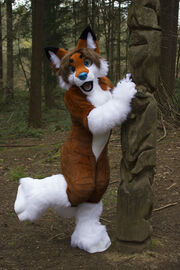 Equium is a fursuiter and musician who lives in the United Kingdom.

He is a member of staff at ConFuzzled, having previously worked for Scotiacon, NordicFuzzCon and Frantic Eufuria.[citation needed]

Equium's fursona is a red fox.

Equium's fursuit was created by Kerijiano of Snow Gryphon Suits, and debuted at ConFuzzled 2019.

Equium is an amateur composer and often composes personal theme tunes, as well as scene-setting orchestral pieces. He mostly makes use of the orchestra in a self-defined "Classicalism" genre but also writes ethereal ambiance and pop-esque piece. His character is a red fox with a royal blue nose.

Equium has been writing music since 2000, and describes some of his more orchestral pieces as Classicalism, which he defines as "all the instruments of a classical orchestra, mixed with techniques from classical music and minimalist music." His music can be found on his Fur Affinity page and on Bandcamp.