Although the upper torso is of human shape, it is generally depicted as having the same fur and patternation as the equine portion of the body, in contrast to a classical Centaur with which the torso is furless. The mane may also run down the upper back. Also, because of their appearance, equitaurs are often depicted as more bestial then Centaurs in art in literature. In such works, equitaur stallions are normally shown to be strong and noble, and equitaur mares are often shown as coy, flirty but compassionate.

An Equitaur can produce both human and equine vocalisations (speech, and neighs/whinnys). They may possibly be considered slightly closer to a pure equine than Centaurs are. 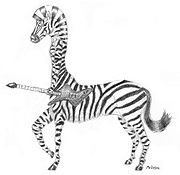 Equitaurs are also referred to as "horsetaurs," or in the Chakat universe as "quanges," a term coined by the artist Roy D. Pounds II. 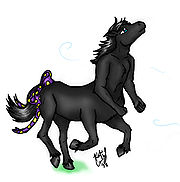 In the episode "Quest for the Potion of Power" of the Nintendo-themed cartoon series Captain N: The Game Master, Captain N and his companions join forces with Link from The Legend of Zelda series and encounters the boss character Horsehead, who is depicted in the episode as a brown equitaur with a yellow Mohawk and goatee. In the game Zelda II: The Adventure of Link, this character is normally depicted as just an anthropomorphic horse. He attacks the group after Link steals a jewel from his horde, and is defeated by Captain N.

In the anime series Ultimate Muscle, the chess-themed wrestling character Checkmate is capable of transforming into a horse-headed centaur.

Equitaurs, referred to as "quanges," appear frequently in the Chakat universe, usually serving in the capacity of transport drivers, mechanics or other skilled laborers. One notable equitaur in the series is Carol, who owns and runs her own diner named The Gulp 'N' Gallop that specializes in serving equitaur clientele. She is joined by fellow equitaur Joe, who is the restaurant's head chef.