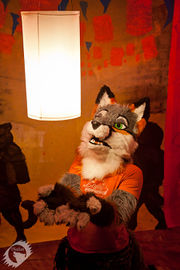 EosFoxx has run a small furmeet called Fur-CAMP since 2004. She goes to most German cons.

She also helps at Eurofurence with the the security department, and has a lot of fun giving a helping hand at every convention. In 2007 (EF13) she founded the charity event and took over guest of honor liasons. She stayed in those position until EF 17 and then took a year of from all convention work. Today she helps her partner Jaryic as secretary at the Stage at the event.

Eos had to change her nick once as stalkers followed her through the internet and started to make trouble in her life. She chose the name of the winged goodess of dawn - Aurora, also called Eos - because she loves the blue hours of every day, plus her character has also wings.

EosFoxx's fursona is a catvixen. She has blue eyes and brown hair and is tiny, similar to the human Eos. Her base fur color is a dark red (a mixture between burnt umber and crimson). She has a black stripe on her bridge and her shoulders, on each thigh and an extra one over each of her blackpaws. Her ears and the tip of her tail are also black. The fur at her throat and stomach is totally white.

Eos is seen on four and on two legs and has only wings when she is happy.

She build her own fursuit, a grey vixen called Phoenix, together with her partner Jaryic in 2011, which she has entered various dance contests with it.

EosFoxx shows her art on many internet galleries and at conventions in Europe. Her style is often realistic, but she also likes toony styles. Most of her art is done in traditional media such as acrylics and pencil.