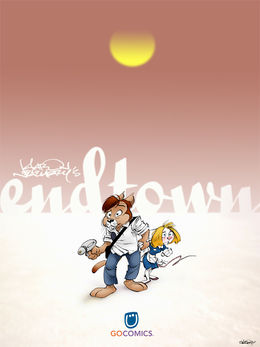 It's the end of civilization as we know it. A pandemic of a mutagenic virus followed by a global war fought with disintegration weaponry has left much of the planet Earth a desert of fine powder and what remains of humanity fragmented into humans, animal-like mutants and bloodthirsty monstrosities with lots of teeth.

The surface, still teeming with the mutagenic agent, has become the domain of the Topsiders; well-organized, technologically advanced, and heavily armed un-mutated humans intent on exterminating mutations of any kind in order to clear the way for the eventual resurgence of a new, genetically clean humanity.

Faced with annihilation, mutants and "impure" humans have retreated to various types of shelters to form communities and hope to win, or at least survive, what may prove to be mankind's final war.

Endtown is the continuing story of one of those communities.

In the near future, conflicts between various countries results in all of them launching a variety of weapons at each other all at once. The resulting unpredictable combination of side effects wiped out the majority of the population and turned most of the Earth's surface into a wasteland. The survivors were divided up into roughly two groups: those who became mutants (or were immune to mutations), and those not yet exposed to the mutagen. The first group, collectively known as "mutants", either roam the surface raiding city ruins for food, or live in survival bunkers. One such bunker, located a mile underground, is Endtown. The second group are the "Topsiders", highly prejudiced "pure humans" who live in an undisclosed location(s) and hunt mutants with the goal of ridding the planet of them. The Endtown story revolves around one group of mutants attempting to survive under these conditions.

The Endtowners, as they call themselves, spend most of their time in the underground city, with occasional forays to the surface to scavenge for food. Because of the effects of the post-War radiation, most protein-based foods have turned to dust, leaving only those items still in cans. At the time in which the story is set, six years after The End, cans of beans are all that remains in the ruins reachable by foot. Endtowners only have a synthetic "vitamin cake" and beans to live on. The lack of variety in their diet drives many of the Endtowners to desperation.

The mutagenics' effects do follow clear rules described by the author, though from the outside the effects appear unpredictable. Humans are often turned into monsters, though the luckier ones can become animals. Species shown so far include a Rhinoceros, several breeds of cats, mice, crabs, fish, dogs, cows and at least one worm; there are also extremely rare cases of humans being naturally immune to mutation and retaining their original forms, but they still contain the mutagen within their cells and as such are considered unclean by topsiders, still subject to termination. The more bizarre but benign mutations include a hunchback with a fish head that falls off (and presumably grows back), and the Oracle, a precognitive pool of water. There is a series of canals in Endtown to support the water supply and sewage carry-away, as well as providing the aquatic species a place to live. On the surface of the planet, the Topsiders wear sealed suits to protect them from the tainted atmosphere. If the suit is damaged, the victim begins to mutate within seconds.

In the story, Endtown is described as a form of commune where the inhabitants provide various services in return for housing and food. Most services are along the lines of working at a cafe, or acting as a doctor, police officer or main entrance gate security. Greater rewards are offered for Topside scavenging missions, but the odds of not surviving one of these missions is very high.

Topsiders hunt mutants as part of their eugenics campaign for two known reasons: to eliminate them from the planet and to put their brains into machines such as the transport vehicles, blaster guns, and robot tracking devices called "Multi-Use Terrestrial Trackers" (AKA: "mutts").

While fighting Sparkplug, Al needs to rescue Gustine and is killed in the process. Gustine then uses the fruit to save Al, and thus is satisfied in staying as she is. On the way back to Endtown, Gustine, Al and Petey are attacked by Topsiders. Petey is left behind, and Al and Gustine are set up to look like spies leading the Topsiders to Endtown.

This leads to an investigation by Capt. Flask intended to find the two as traitors. However, a second trip to the surface reunites Flask and Petey with the revelation that the two used to be partners before Petey was turned into a truck. The arc ends with Petey getting a new body, Al and Gustine being declared innocent, and Flask brooding on her sins.

Monsters range from what appear to be pools of goo, to things like a big octopus and really large hungry shapes. To date, only one type of monster has been identified by name.

So far, the Endown story has taken place primarily around the Endtown bunker, meaning that little is known about the rest of the planet. There are essentially 5 locations or entities that have been highlighted as of April 4, 2012.

Although the warring countries at The End used many different kinds of weapons, only two have been described in the story so far.

Amesworth Radiation, a form of radiation harnessed by the inventor Sam Sanders for Apex Industries. Amesworth radiation is used in ray guns and disintegration beamers. As mentioned in the comic, if the radiation is strong enough it will disintegrate anything. At lower levels it only affects organic matter. (Twinkies are thus identified as inorganic). It is named after its discoverer - Dr. Eden Amesworth, who Sanders may have actually met at one time.

The Mutagenic Virus has not been explained in any detail so far and may not actually be a virus. This is the thing that turns humans into mutants, and is present throughout the planet. Generally it is referred as "the mutagens". It's questionable as to whether the mutagens were initially intended as a weapon, or if it was accidentally leaked from somewhere. If a human is unconscious when exposed to the mutagens, they turn into an anthro. If awake, they morph into a monster.

The series is available in paper form via Jarlidium Press. A short 22-page print comic produced for Comicpalooza is available for purchase directly from Aaron.