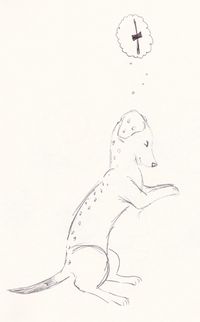 Ellie Dachshi [1] is an artist who is the creator of the web comic House of Lost Dreams.

Ellie is member of a artistic group who work together, often collectively under her name for simplicity's sake. She works in a variety of media, from comics to stuffed animals to paper-cutting. Although she can and does use digital media for creating art, she prefers traditional formats, including charcoal pencils, graphite, and inks. She also enjoys using pens and and a combination of paints and pencils to achieve the right vibrancy in colorings.

Although she is not a well-known fur nor a high-profile artist, she has had significant trouble with people trying to steal both her identity and her comic strip House of Lost Dreams.[citation needed]

Ellie's fursona is a red dachshund with black dappled markings from her ears to her tail, which make her look like she dipped in oil. She is wall-eyed and heterochromic, with one blue eye and one brown. She is sometimes seen wearing a blue collar, but generally does not, and is feral in appearance.

Although Ellie generally moves on four feet, she will sometimes walk on two for comedic or artistic purposes. During these times, she will use her front paws like hands. She only rarely takes on an anthropomorphic form.