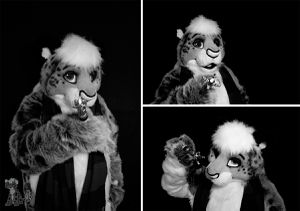 Elias with a sonic screwdriver. 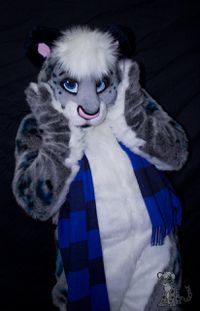 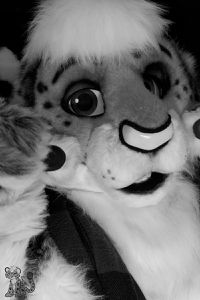 Elias Saphir is a creative and geeky snow leopard fursuiter living in the state of Utah, USA. His favorite television show is Doctor Who, Pokémon is one of his favorite games, and to him Asuras (presumably the deities in Hinduism) truly are sexy.

He has many hobbies, such as photography, cinematography, literature, and performing arts. His true love is in web development and graphic design. He also loves making people smile and laugh through his natural comedic interactions and fursuiting.

Because Elias is a snow leopard, his main color palette is white and sleet gray. His accent colors includes black (with a blue tint) and sapphire blue.

His white fur is connected and flows along his stomach, chest, under arms, under tail, inner thighs, and the soles and palms of his paws. His paw pads, spots, the end section of his tail, and the tips of his ears are black (blue tint). The tip of his tail is a deep sapphire blue.

His left eye is a dark blue and his right eye is a shade ligher. He has long flowing hair, down to his shoulders.

His fursuit was made by Latin Vixen. The suit was finished and delivered January 2012.

Elias is one of the founding admins of the local furmeet groups, Utah Furries, which has over three hundred online members and an average meet size of thirty to forty furries.

He is also the creator of the successful group Utah Bronies, but is no longer an admin or involved with the group.