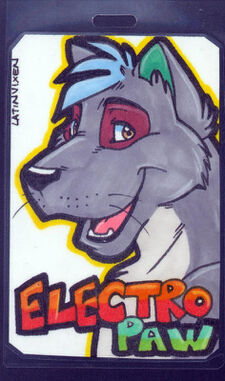 One of ElectroPaw's con badges, art by Latin Vixen 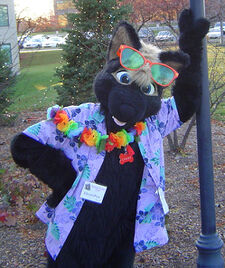 Champ, one of ElectroPaw's former fursuit, made by Whiteyfawks of Arend Studios

ElectroPaw, also known as EP Wolf or just EP,[1] is a fursuiter and fursuit maker.

ElectroPaw's fursona is an anthropomorphic gray wolf, with green on the top of his bushy tail, blue on his feet and hand paws. He also has blue eyes, as well as three different headfur colors (green, blue, or black), depending on his mood. His ears are also green.

The ElectroPaw and Champ fursuits appeared as Subservients[clarify] on episode 345 (August 26, 2007) of the Funday PawPet Show.[2]