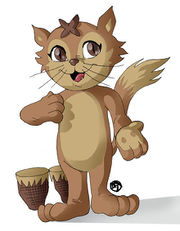 El Gato (Spanish for "The Cat") is the former mascot for Televicentro (now as Telemundo) in the United States.

Starting in the fall of 1970, El Gato was seen in New York State, when Televicentro's owner at the time (Screen Gems Broadcasting) bought another independent station WNJU in New York City. The station adopted the same logo as Televicentro and imported El Gato to serve as their mascot, as well.[1][2]

Throughout the 1970s and 1980s, Televicentro's slogan was "Por el Televicentro como el Gato" (colloquially "on four (legs) like the cat"), which rhymes in its original Spanish translation. Similarly, another station promo used the phrase, "Hasta el gato y el #1 del hispañola" and the cat itself was alternately known as "El Gato de Televicentro".

Like other mascots, El Gato was seen in different situations in different on-air promos. Besides playing the bongos, he would also play the drums or go surfing and was seen in one station ID as a matador. Another promo had him interacting with a cat seen in a Telemundo. El Gato would also sometimes be accompanied by his wife and children (one boy and one girl), where they appeared flying in a helicopter shaped like the channel's "43" logo and celebrated the holidays while playing musical instruments.

El Gato's last appearance on WAPA and WNJU were in 1984, when Televicentro was renamed into Telemundo, though he stuck around at his home station, WAPA changed their call sign to WARG in 1987.