El Burrito de los Muertos is a novel written by André Blaireau and published by Bad Dog Books in November 2007, under the FANG Presents imprint. The cover art is drawn by Grimal. 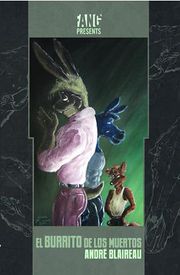 Jesse Krolik, the frisky “licensed sex-maniac” from Everybody Loves Luther, has grown up. Now known as Dr Krolik, he has a degree in social work and his first job is with the Department of Social Services in the southwestern town of Purgatory.

The local police force, Jesse’s department, and the Purgatory Watch and Ward are in a tizzy over a recent scandal that started out as a case of pedophilia and turned into a kind of home-grown prostitution ring of youngsters who had learned how to combine business and pleasure–the latter including drugs as well as sex.

He is unexpectedly drawn more deeply into the life of one of Jesse’s clients, the coyote pup Hector Perrito. Mayhem, murder, an unhinged public official, and a thrilling rescue from the Puente de los Muertos, a cave outside of town, provide a stage for the appearance of a new side of young Perrito.